Brain-storming habit-forming battle-warning weary
winsome actor spewing spineless chilling lines ---
the critics falling over to tell themselves he's boring
and really not an awful lot of fun.
Well who the hell can he be when he's never had V.D.,
and he doesn't even sit on toilet seats?
Court-jesting, never-resting --- he must be very cunning
to assume an air of dignity
and bless us all with his oratory prowess,
his lame-brained antics and his jumping in the air.
And every night his act's the same
and so it must be all a game of chess he's playing ---
``But you're wrong, Steve: you see, it's only solitaire.''
War Child 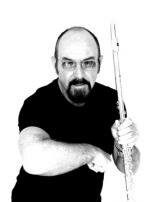